The Second Time I Rode in a Tow Truck in Saudi

Those of you who are remotely familiar with me know that I have horrible luck with cars.  Specifically, their windows.  I have possessed 4 cars in my life and all of them have had some pretty interesting things go wrong with them.

My first car was a brand new silver Saturn sedan that I had affectionately named "Space Ghost".  I loved that car.  Not a lot of pickup, but we drove all the way to Georgia alone together and we got along really well.  He tragically collided with the rear end of a tractor trailer on I-65 in front of Mister T's Patio Furniture on a particularly drizzily day in Nashville, TN.  This was of course only 8 months after I got him.  It remains the only accident I've ever had driving, but scarred me enough that now I "drive like an old lady" to quote my dear wife.

Except without the cool spoiler...

My second car was a iridescent purple-ish Grand Am that I thought was the greatest car in the world.  That was because it was the greatest car in the world.  It went through the hands of me, my brother, my sister, and then me again.  I had just received it back into my hands again when suddenly a phenomenon occurred...a phenomenon that would haunt me for every car that I have ever owned since.  A friend sitting in the back seat rolled down the window...and it stayed down.  Inexplicably the car that had never had anything wrong with it...broke.  I continued to drive it with a doorstop jammed in the window to keep it up...that is, until my favorite car I've ever owned died tragically on a shoulder of I-65 next to the Cool Springs off ramp.  The "Purple People Eater" died...overheated and too expensive to repair.  My father was kind enough to trade him in for a new car, and then gave me the last car I would drive while living in the states.

Loved that car...except mine was purple.

I began driving a green Buick Regal that was pretty epic.  It was also my Dad's car so I knew that it was in near perfect condition...or so it was until I got it.  Almost immediately after I got it the "phenomenon" happened.  First, it was just one window...then without warning...all the windows broke except the driver's side.  I was crushed.  "What have you done to my car!?" my dad asked, totally bewildered.  I had no answer...and still don't.  I never even put the windows down!  Anyway, I never named that car.  I felt like "The Regal" was enough.  Maybe that was why the windows broke...maybe the car was so offended that he never got a nickname...I'm not sure, but that car was given up to scrap...and I was sorry to see it go.

I just found this random picture on the internet...and THAT WINDOW IS BROKEN!!!

After all these tragedies with vehicles, I was going to get something really good when I got to Saudi.  I checked a bunch of websites and finally found a great Volvo.  It was perfect and fancy!  It had leather seats and everything.  I drove it to school after I got it, proud as a papa...and then heard this: "Who is the maniac who bought the Volvo!?"  That's right.  Now, I should clarify...nobody thinks Volvos are bad cars here, but they're uncommon.  That means I know of one garage that can fix them.  ONE.  Which brings me to the purpose of my post tonight.

The Volvo was working fine and then boom.  Like the Grand Am, the Volvo had overheated.  This time I had the money and I was going to fix it.  But how do I get it to the ONE Volvo shop that's in the next city over?  Tow it, of course.  Tow trucks here are about the same...with the exception that you're expected to ride in the truck.  I hopped in the cab and grabbed the seat belt.  I pulled it to where I expected to find the buckle...but was met with only the foam from the seat.  Awesome...no seat belt.  These are also not the Peterbilt kind of trucks at home with a hood and a grill.  Nope, its just glass and then the road.  We've already talked about the driving here in Saudi...I assure you it's even more terrifying with a ton of Swedish metal (haha Swedish metal...)strapped to the flatbed of basically a pickup truck with no seat belts.  Anyway, we get there and get back safely, car is fixed...no more problems...

Until there were more problems.  We came back from our delightful summer back home to find the battery dead and the "phenomenon" had struck as well.  So today I set out to get the car to the shop and this is the process I had to go though:
It was then that I returned home to watch "How I Met Your Mother" with the lady, my errands complete.  Now I get to have another great conversation with my Jordanian Volvo guy about how much of my money he wants to take.  (allofit) 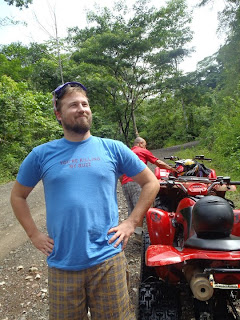