Featured Photo: This is something you don't see very often back home 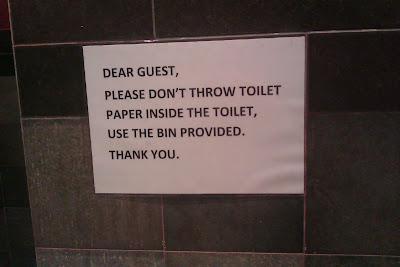 You'd be surprised how many times we've seen this sign in bathrooms around the Middle East. I think the logic is that the plumbing can't handle the load (pun totally intended!) of all the paper waste. Here's hoping that everyone's visit is just to take care of number 1!

Our apartment: a work in progress

One nice perk of being an international teacher is that many of the schools overseas provide housing for all their teachers. Our school provided us with an apartment that was furnished with the basics--VERY basics. We got a bed, a wardrobe and dresser, an oven and fridge in the kitchen, 2 couches and a dining room table. We are responsible for purchasing everything else. This is a blessing and a curse. It gives me the chance to decorate however I want and buy as nice or as crappy as I like. The nester in me is SO happy! The financial nerd in me, however, is kinda freaking out with how badly the exchange is not in our favor over here!

That said, I'm posting highlights of our apartment as it is at the moment. Hopefully I'll remember to post again once we've got everything purchased and in place...which might be next year BUT I digress.

So that's our new home! I really do enjoy living here.  I cannot wait to slowly add furniture so it'll start to look more like the home of a couple of almost-30-year-olds and less like that of an apartment of the newly-graduated-from-college-and-broke!

Given the state of the lives of Americans living in the Middle East, the title of this post is well timed, I supposed. It's also a bit dramatic considering that we have been very safe here in Kuwait. There were some protests outside the American embassy, but nothing compared to the turmoil going on in other countries.

I apologize for the long silence, readers. Since we made the long trek over the ocean back to the Middle East, we have been busy busy busy! We moved in to our new apartment, had orientation sessions with the new school and 50 of our newest colleagues, then had to dive right in to classroom prep and unit planning before the kids arrived! It was A LOT to do, but I have been so happy to accept the professional challenge. The Mister and I are already so happy here in our new home. And, just as I suspected would be the case, I have already learned so much in these short weeks.

1. I CAN fast track my room prep and get ready for a new school year in less than a week (sorta). Those who worked with me in the States can attest to the fact that I'm a little obsessive when it comes to my classroom. In Nashville, I would start setting things up, arranging desks, and organizing files as early as July. I would come in to the school for a few hours each day and accomplish at least one thing. That gave me plenty of time to figure out what kind of desk configuration I really liked, as well as hunt down those cutsy classroom things that just called to me from the dollar section at Target.

I looove setting up my classroom. It reminds me of when I was a little girl and would make believe with my friends. But this year, I had roughly 6 days, zero money and bare bones school supplies to work with before the kids arrived. I was waay out of my comfort zone! But about 3 days before First Day, I snapped out of my panic attack and scrounged together what closely resembled a classroom I could deal with.

And the kids didn't even notice that the room wasn't done!

There have definitely been some hitches that more closely resemble Amber's-first-year-classroom more than that of seventh-year-Amber...but that's the beauty of growth.

2. I CAN drive in a Middle Eastern country! Admittedly, the driving here is exponentially better than the driving in Saudi Arabia. And I obviously do not have a firsthand Saudi driving experience to compare to driving here, but I am happy to report that I am very comfortable behind the wheel in Kuwait! I even had a friend who doesn't have a car and thus hitches rides with all kinds say that I am a very good driver and she would ride with me anywhere.

This is only the second foreign country I have ever driven in, so I'm pretty impressed with myself!

3. The Mister and I CAN survive without internet in our home!  Your could say that I have been in full-on nesting mode since we arrived. We had basic furnishings in our apartment when we arrived, but there was still a lot of stuff to buy to make the new apartment feel like home. Add to that the fact that we have friends from Saudi Arabia coming up to visit soon and you see how I was able to convince the Mister to spend most of our money on things other than Internet service.

Although...we just dropped most of the last of our settling-in money on internet service and satellite TV rather than furniture. Sometimes I let the Mister win.

4. I CAN lose an extremely sentimental item and live without it. Some of you may remember that we moved our stuff up from Saudi Arabia before we headed home for the summer. That was a major blessing because it allowed us to save money on massive baggage fees and we were able to bring over fun household items because all the basics were already here. When we returned, I was distraught to find out that while our apartment was getting painted this summer, someone walked off with my College of Charleston t-shirt blanket. It was one of my most sentimental items and I absolutely loved it. I would be lying if I said I haven't cried about losing this silly blanket more than once. I talked to the man who is in charge of maintenance for the residences and I was basically told that the blanket was gone for good.

I had been prepared for this kind of reality by the Mister's mom, a former military wife. I was informed about the fact that with all the moves something was bound to get lost or broken. I just hadn't banked on it being something so valuable in irreplaceable. Oh well. At the end of the day it's still just a thing.

At least that's what I keep telling myself to keep from crying.

Many more updates to come, dear readers. I'm working on uploading photos of the classroom and the apartment. Stay tuned. 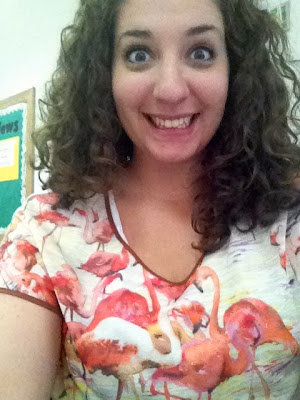 I'm wearing this fun shirt today. That's my classroom in the background. I'm writing this on my new iPad. SO MANY CHANGES TO TELL YOU ABOUT!

I'm working on a new post that has a lot of details, don't worry!