Why is finding a doctor so hard!?

As some of you might recall, figuring out the medical system in Australia was a bit of a challenge, so I didn't expect it to be super easy here, especially considering the language barrier. I went back to the OB close to my house for the early visits, but she doesn't have a delivery room in her office, so she cut me loose around 12 weeks along. I knew there wasn't a twins specialist on the island, only 2 or 3 hospitals with English-speaking doctors or staff, and only 2 with an NICU, so my choices for places to go was limited. I also knew there was a midwife on the island (a rarity in Korea, I was told there are only 4 or 5 in the whole country), but I figured I should deliver in a hospital because I thought the chances of the twins needing medical attention right after birth would be pretty high.

So I started by going to the university hospital in the city. It was the most modern, had a translator on staff, looked a lot cleaner than the other hospital with a NICU, and I knew that one of the doctors had delivered a set of twins for an expat couple recently and they seemed to have liked her.

My first meeting with the doctor at the hospital was fine. She wasn't overly friendly, but bedside manner isn't a high priority here, it seems. She jumped immediately to a c-section as my only safe delivery option. Almost half of all births in Korea in 2017 were by cesarean, so I wasn't surprised that was her preference.

What I hadn't counted on was the non-negotiability of the c-section and the bluntness with which doctors would make the case for surgery. Simply put, I was old (the word "geriatric" was literally used to describe me), I was fat ("your size is quite large"), and I was having twins. There was no other choice but to do a c-section. I explained to the doctor (at my first appointment, at 12 weeks) that I had delivered my first baby without a c-section, so couldn't I do it again as long as there are no complications?

I was given the answer that I have come to understand is Korean for "no:" We'll see. The doctor said that if the babies were in the right position at 37 weeks, I could deliver naturally, so I focused on that as my belly grew and prepared myself for that discussion as the 37 week deadline approached.

Imagine my shock when, at 32 weeks, the doctor declared that I had no option but to do a c-section and she went ahead and put it on the calendar.

I still had five weeks before the deadline! Why put the surgery on the calendar now!? I was furious! I was disappointed! I was confused!

She said that it was because the babies weren't both head-down, and twins don't turn after 32 weeks.

Well, now I was doubting her medical knowledge, because I KNEW that wasn't correct. I asked what a c-section entailed because I knew the basic idea, but not the details. I shouldn't have asked because the details were my nightmare birth scenario.

1. Tyler couldn't be in the room, not even a little bit.
2. I couldn't do skin-to-skin.
3. In fact I wouldn't be able to touch my babies for a few hours after the birth because-- get this--they would deliver the babies, let me see them, and then PUT ME TO SLEEP UNDER GENERAL ANESTHESIA! I couldn't hide my shock when the doctor told me this, so she said, "We don't have to do that if you don't want to." Uh, yeah. Take that one off the ol' list there, Doc. Apparently that is standard operating procedure here because "many mothers are exhausted after giving birth."

Hate to break it to you, ladies, but THAT'S MOTHERHOOD!

4. No sitting up for several hours and no standing up for at least 24 hours.
5. No breastfeeding for three days. THREE DAYS!
6. No babies rooming in during recovery.
7. The IV with pain meds stays in for at least three days.
8. No leaving the hospital for five days.
9. No going into natural labor and doing a c-section then. In fact, no carrying to full term. The babies would be taken at 37 weeks.

There wasn't a single item on that list that I was ok with. Not a single part of the hospital's policies made me comfortable with giving birth there. I was choking back tears as I thanked the doctor for her time and left the appointment.

After my little pity party, I left the hospital to go on the hunt for a new doctor. At the very least I wanted to find a birthing center where Tyler could be in the room with me during the surgery.

I visited or spoke to about 5 doctors at the end of it all. All of them said I would have to have a c-section. All of them said I should go back to the hospital and deliver there with my original doctor. One of them wanted to take the babies even sooner than the doctor at the hospital. One of them flat out refused to speak to me beyond the 2 minutes it took me to say, "I'm looking for a second opinion." I was feeling hopeless.

That's when we spoke with a Korean who had delivered with the midwife. I expressed my jealousy and she said I should meet with the midwife anyway. Breech birth was no problem for her, and she has delivered lots of twin before. A spark of hope returned.

I spoke to more folks that had delivered at the midwife's birthing center, including one who had to be rushed to the hospital for a complication, and all of them sang her praises. I then did a little more research and found out that only 20% of twins actually need the NICU after delivery, a number that greatly decreases the closer the babies are carried to full term. I was comfortable with those odds.

And it turns out I was REALLY comfortable with the midwife! As soon as we met her, literally within the first minute as we stood in her parking lot making introductions, I felt at peace. She put her hands on my belly and said, "Head here. Head here." She knew the positions of my babies just by looking at me. She didn't speak any English, but I didn't care. Over the course of her 37 year career as a midwife, she had delivered over SEVEN THOUSAND babies! She laughed at the idea of a c-section, was not scared of the prospect of a breech birth, and said she would be willing to deliver my babies. I was thrilled to break up with the doctor at the hospital at my next appointment.

Sadly, my dreams of having a natural birth would not come true and I would have to tuck tail back to the university hospital a few weeks later. That story will be next. 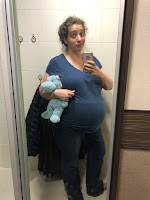 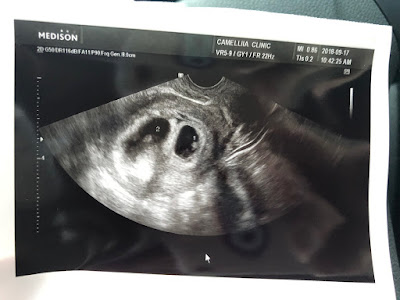 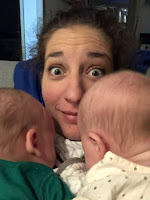