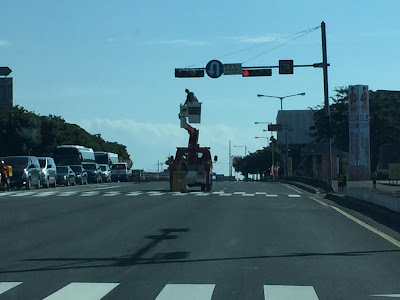 In all of the countries we have lived in so far, I think it would be fair to say that the people as a whole have been pretty easy going, not overly anxious or go-go-go. But once they get behind the wheel of a car it's like they are in a race and desperate to get to the finish line! I am constantly being tailed here, no matter how far over the speed limit I am going.

Which is why photos like this one are really scary! Let me set the scene. Sadie and I went on a little adventure yesterday, and at one point I was stopped at this red light on a 6-lane main road. It's a major thoroughfare with a long straight stretch and no speed bumps. People will tear through this intersection at 60 miles an hour if the light isn't red. It's hard to see in this photo, but the cherry picker is in the middle of the three lanes so that the stop light can be repaired. Directly in front of the truck is a man standing behind a yellow sign. That man is supposed to signal for all the people to get into the other lanes...he's standing between the sign and the truck. Literally inches from the bumper of the truck.

In the States, there would be cones a half a mile out, signs telling you to merge into one lane, maybe even a cop with his light flashing. Here is one dinky man with a red mini light saber half-heartedly waving it and hoping no one plows into him at 90 miles an hour. Seriously if the light hadn't been red I would not have realized in time that this truck was at a dead stop. 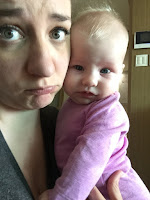