in which i take you along with me to get a haircut.

Now, before I begin, I should make one thing clear: I'm not really a "pamper myself" kinda guy. I don't really like cosmetic things to be a big deal. My normal haircut costs about $15...and it's always at a place in a strip mall with a clever name like "Kwik Kuts" or "Head's Up". I got a shave before our wedding, and that was a special occasion. I'm usually in and out in 20 minutes...and that's if I get a shampoo and the stylist is particularly talkative.
Here, as many things are, it's totally and completely different.
I noticed today that my hair was particularly shaggy and we're about to go on vacation (real pumped for Barcelona!) so I thought it would be a good idea to get a trim. I grabbed my keys and headed off walking for the barber shop.
This is the third time I've been to this particular barber shop. I even have a "usual" at this place...he is, of course, my barber "guy". He's a Bangladeshi guy who calls me "Boss" (something he calls all of his customers) and talks pretty much non-stop the whole time in an English-Arabic hybrid that is mildly understandable. I think it's a great place because I can get a shave and a trim all for around $6.50. That being said, I've never had the same thing happen any of the times that I've been...and this time was no exception.
The guy works alone, so I got to the place around 8:30 pm expecting to see a few people waiting, only to find that there was another barber there. Already things were different than last time. I of course got called by the new guy and we began. The regular guy was nice enough to let the new guy know my normal "do" and shaving style in a language that I can only guess was a mix of English, Arabic, and Bangladeshi. I am amazed by this because the guy remembers my "usual" from the first time that I came in. One time and BOOM, he's got it. Incredible...(digressing).
The haircut was pretty normal, with the exception of the brutality my scalp endured at the hands of that man's comb. It was the shave that got kinda strange. First of all, they lather you up with this gel and then just kinda let it sit. They then take a straight razor and light it on fire with rubbing alcohol. Obviously, this is sanitizing the razor...thanks, man. He begins the shave, which is nice enough. He finishes and washes the excess gel off and I'm thinking, "This is where dude stopped last time, so it must be time up..." I start to get up, but he gives me the barber pressure on the head, which means sit down and stay still. "Alright..." I then experience one of the most awkward (and honestly kinda painful) skin treatments I've ever had.
He rubs this pink lotion on my face which smells like banana yoplait...and just kinda leaves it there. I also want to note how close to my nostrils this lotion is applied...like basically inside. He thankfully washes it off...which I again, foolishly, think is the end. He then grabs this stuff that looks kinda like spicy deli mustard. I can feel the harsh pellets in the lotion and immediately think, "oh no...not ex-foliation..." But oh yes. He not only rubs it in, he GRINDS it in. This goes on for literally 5 (PAINFUL) minutes. I begin to wonder if he's just having some fun with the white guy...a paranoia that I feel a lot here...but the guys behind him are just chatting like it's totally normal.
When this is mercifully over, he steps away for a moment. I start to get up, but for the third time, he makes me sit so he can finish: some water on the hair and beard, an impromptu scalp massage that made me see stars a little bit, and then the styling of my new "do" so that I look like a "Top Gun" pilot...(Ice Man, of course). He gestures for me to get up, with a flick of his apron for good measure. A little anxious to leave before he changes his mind, I pay the man and bail. On the way out I glanced down at my watch and realized that I had been there for an hour and 15 minutes. Wow.
So the obvious question is why I allow myself to be tortured like this...and I think the answer is that I really do enjoy getting a shave and all that along with the haircut. In a place like this where there's such an emphasis on how you look, it's interesting that so cheap to get someone else to groom you. Anyway, I'll keep going back to my slightly insane barber just for the experience...plus it's a great haircut.
Vicariously yours, 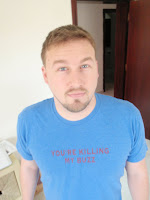 Email ThisBlogThis!Share to TwitterShare to FacebookShare to Pinterest
Labels: Home Sweet Saudi Arabia, OMG I live in a foreign country, Posts by Tyler