so there i was...enjoying my potato chips...

...when all of a sudden I was struck with the thought that I'm about to be working again very soon. Normally this wouldn't be something that I'd be worried about, yet here I am...really kind of concerned about the year coming up.
I really haven't been thinking about it but Ellyn left today for her own crazy adventure in Cairo and Amber has been napping away the afternoon. So without the distraction of...well, anything, I've been alone with my thoughts. The adjustment of living in Saudi is going to be a challenge in and of itself, but the challenge of teaching in a Saudi school is something that I'm totally overwhelmed by.
As part of my homework for this coming year (yeah, I had homework...) I read a book called Destiny Disrupted which basically explains the way that Arabs and Muslims see history. It's been totally mind blowing, but not for the reasons you would think. Take, for instance, the way that westerners look at world history. It's totally chronological and linear. If I asked my 8th graders at FRA to give me the history of the world really quickly, they would look at me like I was crazy and then go back to texting.

OMG i totly dk!
However, if I posed the question to one of my peers it would probably sound like this: cavemen, fertile crescent, Egypt, Greece, Rome, Middle Ages, Renaissance, exploration & colonization, America, WWI, Depression, WWII, Cold War, and the present.
What's missing (besides most of world history)? Duh. Arabs. The development of the entire Arab & Islamic world has been ignored by westerners in our timeline of world history. I honestly don't think this was a conscious choice. We have traced our western civilization back to the beginning and not really been that concerned with the rest of the world. And in the course of creating a world history curriculum for schools, the priority was learning where the ideals and customs that we utilize in this country come from...and those do not come from the Arab world...or the East Asian world and Africa, for that matter.
SIDE NOTE: Of course you could argue that last point with me, but let's focus on the subject at hand, hmmm?
It's really important to remember that the way that I learned history and more importantly the way that I learned to look at history are based on this idea of education. I needed to learn from whence our customs, ideals, and traditions come from, so we learn about the history that concerns us. This is, in essence, the same thing that goes on in the Middle East with history. But they are obviously concerned with the history that led to the creation of their own civilization, which is totally different.
Countries like the United States which are made up of a plethora of peoples from all places and histories (the great mixing bowl, as Mrs. Blevins calls it) have to face teaching history in a different way. Ignoring the entire Arab, Asian & African worlds in world history is ignoring the kids sitting in the classroom!
So here's the question: How do I address this obvious gap (chasm, really) in our versions of history?
American schools have taken a stab at it...we toss in China, even Babylon into the world history courses in 6th grade. We do Africa in geography...which ends up cramming thousands of years of history into one slide on a powerpoint so that the poor guy teaching can get through their standards by the end of the year. This usually ends poorly. One of my 8th graders from my first year at FRA told her mother that I was moving to Saudi to "teach children in Africa". *sigh* Another one told me, "dude, the city youre moving to has a bad word in it". Yes, Dammam, the third largest city in Saudi has a bad word in it...incorrectly spelled of course. And these are just comments about Saudi! Let's not even touch the simple fact that if you asked most American middle schoolers, they would probably tell you that Africa is a country and that African-Americans live there. But I digress...
After pouring over it, I decided that the best way to approach it is to look at the world as a Venn diagram. Kinda like this: 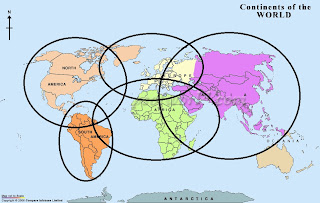 Because the history of each is linked to the others, but they each have very specific histories to themselves. We have to address each individually, and yet connect them all together. Now the obvious problem becomes...how do we do this in a year? How do we break it up? Now that...I'm still working out. But I think that this makes the most sense. There is going to be a gap in the way we both approach history...so I say, let's toss both notions of history we have out, and start with a clean slate.
The ultimate pursuit of history is to answer the question: Who are we? I think that chasing that question will take us everywhere we need to go. Who the Saudis are...Who the Americans are...Who we as humans are. I'm excited about the opportunity to do this...but it just makes me nervous, man!
I will now return to my previously scheduled potato chips.
Vicariously yours, 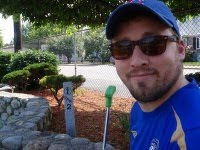 Email ThisBlogThis!Share to TwitterShare to FacebookShare to Pinterest
Labels: A history lesson, Before we left the States, Posts by Tyler