Y'all, I gave birth in a government-funded, single-payer healthcare system, public hospital, and I lived to tell the tale! Someone tell the GOP!

I had the best laid plans. The baby would be born early (my sister was born early, my niece was born early, so obviously the first babies in my family are born early), we would have plenty of time for Tyler to bond and for us to get the kid's passport worked out before he would have to leave for Korea. It was going to be great.

Then my due date came and went.

Ok, we'll induce on the 4th and have a firecracker baby.

Nope. Labor and delivery ward was too full on the 4th, gonna have to try on the 5th.

Ok. How about we just have a baby eventually?

That plan worked. We checked in, got induced, and things started moving on July 5th.

Well. Contractions started. Nothing was moving, though.

My water was broken (THE grossest feeling!! Why did no one tell me how disgusting that would feel?!) at 8am on the 5th and we were off to the races! I was moving, I was changing positions, I was doing all the stuff the blogs I'd found on Pinterest told me to do (couldn't go to any birthing classes before the birth because they were only offered on the weekend and we both were working to scrounge together money to pay for this birth!). Tyler was being an amazing support and I cannot say enough about how awesome the midwives were in the labor and delivery ward. TEN HOURS LATER, the OBGYN comes in and declares that I was 2 centimeters dilated and now in active labor.

No, he explains that what I'd been doing all day was pre-labor. I hadn't actually been in labor at that point, but NOW I was in labor, medically speaking.

Well, speaking for my uterus, I had been in labor for 10 hours already and I dare him to try to tell me otherwise. He and the midwife told me that the contractions were going to ramp up from here on out and get closer together, so get ready.

I was ready. I was feeling pretty tired because I hadn't really slept the night before (that's another, long story) and I had been moving around all day instead of conserving my energy, but I was ready.

I wasn't ready. OH boy was I not ready! Because we had induced labor, my contractions were REALLY intense and REALLY close together, so when the doctor said the labor was going to ramp up, he meant a vertical ramp. I didn't realize a human body could be in so much pain and it not alarm any of the medical professionals in the room. At one point I was contracting AND vomiting at the same time and no one but me and Tyler was alarmed! WHY HAD NO ONE TOLD ME THAT WAS A THING?!

Anyway, after 6 hours of active labor, I had to make the call. The OBGYN came back and I had only dilated 4 centimeters after all that, and he told me we could stay the current course and after 4 hours, maybe less, I could be fully dilated and ready to push ...or we could be at it for another 12 hours. He just couldn't predict.

It was the not knowing that did it for me. If I had an end point and could focus on that, then maybe I could have gone it without medication, but the idea of doing this for another 12 hours or possibly more was too much to bear. Epidural it was, then.

After the medicine kicked in, Tyler and I were both able to get some sleep...mine admittedly more restful because they didn't have a fold out bed or flat surface for him to sleep on. All night long I was woken by the sounds of women screaming, followed by 15 seconds or so of silence, then a baby's cry. The labor and delivery ward was very busy!

Twelve hours after the epidural was put in, it was time to push. My OBGYN wasn't enthused about the pushing because the baby still wasn't as low as he would have liked, but it was now or never. This was when I wasn't too happy to have the epidural because I couldn't feel a single thing from boobs down and I couldn't move my legs, hips, or anything. I couldn't tell when contractions were coming on, I couldn't tell if I was pushing hard enough or if anything was getting accomplished, so it was frustrating for me. I would have liked to have felt in control of my body, and the epidural was preventing that.

Long story longer, the pushing was accomplishing nothing, so we had to bust out the forceps. Now, I understood in theory how to forceps worked: giant salad tongs you put on either side of the baby's head and pull, but holy moly I was not ready for the sheer force that was needed to rip the baby from my body! I was trying to be brave and in control of myself as we waited for the next contraction to come once the forceps were in place, but once the doctor started pulling I let out a scream and panicked! It was so scary! I was sliding down the bed and couldn't stop myself and was feeling a LOT of pressure that I didn't expect. I couldn't look at Tyler because I knew he would probably have an expression similar to my own and then I would really lose it, so I looked at the midwife who was on my left side. She looked me right in the eyes and said, "You're doing great! You're alright, you're doing a good job," to which I thought, "I AM?!? Ok! If you say I'm alright I'm going with alright!"

After 4 or 5 solid tugs, our sweet Sadie popped out, shocked as her mother and pooping all over the doctor in the process. He literally scared the shit out of her. She needed a little help getting her breath, but everything was perfectly fine with her and we had a daughter! 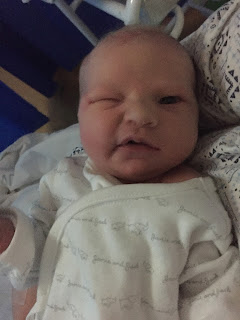 She had a little bit of facial palsy from the forceps, which gave her the cutest little pirate face when she cried for the first few weeks, but she has completely recovered from that and is melting our hearts more each day. 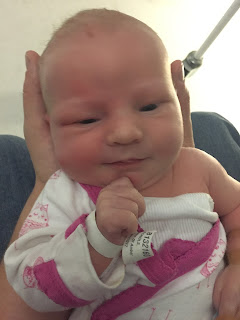 Because my water had been broken for more than 18 hours, and because my OBGYN decided not to give antibiotics at that point, there was a chance of bacterial infection, so they kept Sadie in the special care nursery for five days to give her a round of antibiotics. That was a relatively uneventful hospital stay (there's a long story there, too, but I'll spare y'all), and it turned out to be for the best because some of the night nurses were a Godsend for helping me with conquering the whole breastfeeding thing. Despite the helpful nurses, we were eager to get our girl home, and we are grateful to the fastidious doctors at the hospital for taking care of her and being extra cautious.

There are, of course, lots of side stories associated with this little life event, but I think I've taken enough of everyone's time for one day. I've got oodles more stories to share now that we've arrived in Korea, so keep an eye out for more updates.

Until then, I remain 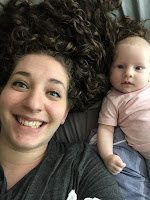