Meanwhile, on the other side of the wall...

I'm just minding my own business...writing my objectives up on the board when I hear something that sounds a lot like someone's baked potato is about to come out of the microwave. Seriously, that's what the fire alarm sounded like at first. At almost the exact same moment the A/C cut off. This has happened before and I thought, like last time, that some kid had pulled the alarm. I proceed to make some jokes with one of my students about how he's on fire...this is, of course, the moment that the principal walks by to tell everyone that it's kind of not a drill. At that moment, a model teacher, I was not.
To borrow from our dear friend Kimmie
[Tangent: In my defense, I have been conditioned by years of American public school fire drills to be calm and orderly while leaving during a fire alarm...however, as most of you know, this has really had the affect of making fire drills totally non-threatening and creates the perfect conditions for jokes that have lines like "oh, the humanity..."]
I follow the mob of students that I have to continually tell to stop running back into the building that I now believe to be on fire (ish...still not a hundred percent really). The middle and high schoolers go to the soccer field and the elementary goes to the basketball court. The former begin texting like mad...the latter, however...well...they decided to have a fake protest. They assembled into the perfect column and started shouting the slogans that they could only have learned on Al-Jazeera. It was totally funny but part of me was expecting tear gas to come flying over the wall. After a couple of minutes the chanting and marching died down (elementary students don't have much of an attention span) and the teachers' whistles led them back to the bball court.
Our kids eventually were led back into the school still abuzz from the whole experience. This left me with every teacher's dream: a room full of post fire alarm kids and half of a teaching period. Let me tell you, we were definitely able to reach all of our objectives today...(yeah right).
Vicariously Yours, 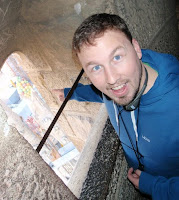