As always, it was a long day at work. I had a lot of things to do and as we get closer and closer to break the students lose more and more of their minds. So currently I'm enjoying a night of hanging out with the Lady and the official pastime of the Kingdom: watching television. Tonight, it's Dances With Wolves, which is pretty awesome because I really like that movie. So I'm actually feeling really good. But then I noticed the editing.
You're probably aware that TV here is edited for content. But it's REALLY edited. A lot...but also in a really strange way. In the States you can expect to have the scandalous parts of movies edited...you know: sex, violence, language, etc. But here it's a little more sporadic.
Some examples: Kisses are edited out. Any kissing. Even the closed mouth peck on the cheek is no longer a part of the movie. This makes some movies difficult to follow. If you were watching a romantic comedy be ready to miss the dramatic kiss at the end with a jump from the "lean in" to the "lean out"...and if Matthew McConaughey was saying anything sweet or important in the middle of that, well, you're out of luck. aaaaaaaand cut. No touching!
What about pillow talk? Take a Bond movie for instance. Sometimes 007 is developing the plot to [insert foxy Bond girl here] whilst lounging in a hotel room in Monte Carlo. Welp, I hope you weren't interested in the back story of the villain, cause it's gone.
At the same time, violence they're okay with. Language too. Kill Bill, Vol. 1 was on the other day and wow...I had totally forgotten how many limbs are removed. Then there were the F-bombs being dropped during Lucky Number Sleven. But then again, sometimes they replace the swearing with something else. Kind of like the Hot Funk version of Hot Fuzz. It's pretty funny to see which times they decide to edit or not...it follows no pattern.
And then there's the act breaks. Normally it goes like this...rising action, big reveal and then as we're all going whoa! they go to commercial. Here...its like that...but then they skip where the break should of gone...go on for another minute or two when we see the character after the big reveal and she's going to get a cab and then...commercial!? What? This happens a lot. While watching Dances With Wolves, there is the big buffalo hunt scene. Now I would cut it somewhere before or after the hunt...but no. Right in the MIDDLE! Why would you do that!?
I mean, I don't really mind the editing, but I just wish it was consistent. Ah well...such is [edited] in the Middle [edited].
Vicariously yours, 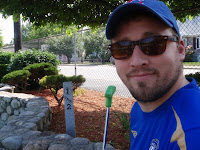