(for those who found us through a google search and just want the nasty details on collecting a stool sample, see this entry.)

So today was our first day of "work," and it was interesting to say the least.

Lemme start from the beginning:

Woke up this morning around 4 am when the first call to prayer began. Conveniently, there's a mosque less than a block away from our hotel, so one of the calls was LOUD and clear. The cool thing about the calls to prayer is that each mosque has its own guy who says the call (he's got a job title, but I can't remember it at the moment), so the mosque down the street will start its call, and then the mosque a few blocks away will start its call a few seconds later, so they kind of go in a round. It's so unique and just...I just can't describe it. We're going to record it soon and post the video so you can experience it too.

Anyway, it's 4 am, I'm now wide awake, even though I don't have to get up for another 3 hours. It's just me and my thoughts. That can be dangerous. That's when the anxiety starts to rise.

It was like my first day of high school all over again. What should I wear? Will I make friends? Are they going to like me? Will I hate it here?

Anyway, long story short, we get to our respective schools, find out we have more paperwork to file--really not all that shocking--and we need to have passport photos taken as well. So we get a driver to take us to a photo studio.

Here's what's funny: I could have brought photos from the US, and they would have been like any other passport photo--no hijab, hair down, everything normal. But because these photos were being taken in Saudi, I had to be covered. So I had to borrow my new boss's abaya and hijab to go run this errand! It was so bizarre! 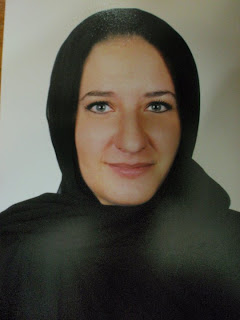 Nothing new for those of you who are friends with me on facebook.

So then we're told we have to go to the hospital. We're not entirely sure what for. We were told last night that we had to do some "blood work" as a part of today's paperwork, but we didn't realize we'd be going to a hospital! Keep in mind that the only person affiliated with the school that is traveling with us is our driver--and he's Filipino. He just goes where he's told. Literally.

So we show up at this "hospital" and I'm immediately shoo'd into the "family section" of the waiting area. This is where the women sit. We have no papers, really no idea what we're at the hospital to do, but some man in a thobe told us to sit, so we sat (by "us" I mean me and one of the other female new hires who thankfully speaks fluent Arabic or I never would have made it through the day!). Apparently the authoritative man in the thobe works for the school, so he was telling the nurses at the reception desk what we were there for.

Get this: We were there to give blood samples, urine samples and ANOTHER STOOL SAMPLE! 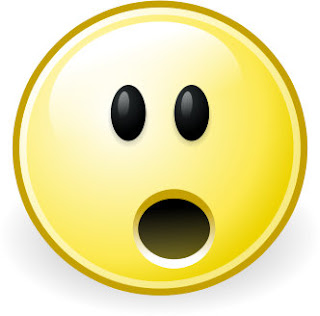 NOOOOOO **side note: for those wondering how a stool sample works, see this post.**

So after waiting for almost 2 hours, watching all the male new hires go first, but having a great time with my new colleague, I'm brought back to get my blood drawn by a nurse who I'm pretty sure was wearing the same gloves she had on when she started her shift earlier in the day--she definitely didn't change them between me and my colleague.

I'm then given two cups. "One for you-ryine, one for zee othear," the kind Asian nurse tells me.

Thanks, but where am I supposed to go to collect these samples?

Keep in mind that I'm still wearing the borrowed hijab and abaya. I'm also wearing a floor length skirt that my mother so kindly sewed me before I left. I'm supposed to take all that and my two plastic cups into this teeny tiny bathroom stall and collect my samples to the best of my ability.

I'll spare you the details, but it wasn't pretty.

I can't believe we got sneak attacked by a second stool sample! I thought I was traumatized by the first one! This one was in a dingy Saudi Arabian bathroom and I had NO GLOVES!

In other news, I got my very first abaya and hijab of my own after evening prayers. Aunt Suzanne, the hijab is the head scarf that covers my hair. The abaya is the long black dress. Here's what it looks like: 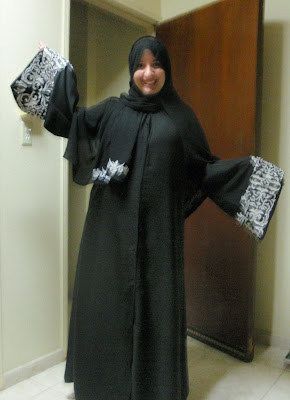 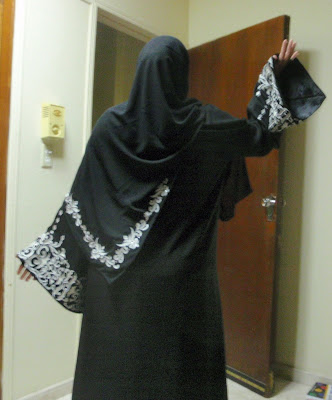 So what do you think?

The trip to the mall is a whole 'nother post in itself. I'll have to save that for later.