Give the call of the whipper will

One of the first things I like to do when traveling is take a walking tour through whatever city I'm visiting. I know it's touristy and obnoxious, but it gives me a chance to get my bearings of where I am, and I get an idea of where the "safe" parts of town are. In addition, I always see all kinds of places to go back to and investigate.
What I hate about the walking tours is that they're often so dang expensive! But thanks to TripAdvisor, we found a FREE walking tour in Barcelona that was pretty darn good! Judit, our Runner Bean tour guide was so cute and friendly. She was born and raised in Barcelona and her pride in her hometown is very evident.
So we went to Placa Reial to begin our tour, and when we got there we found a little Sunday morning market. 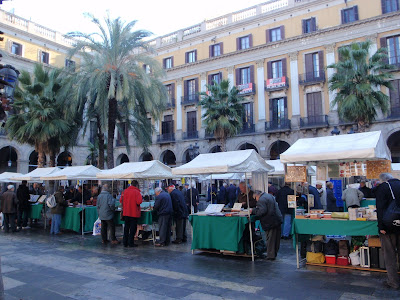 And then there were these guys: 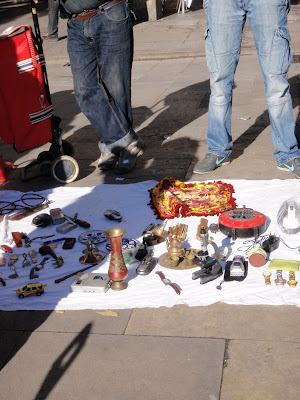 Set up like a ghetto yard sale, the Mister and I assumed that if you get pick-pocketed in Barcelona, chances are these guys will be selling it from a bed sheet the next Sunday. As you can see from the photo, they were hawking a random assortment of ...everything. One guy was working out of a plastic bag selling a bunch of cell phones that had mysteriously lost their chargers and had lots of strangers' phone numbers programmed into them.
The whole thing was very shady. And then while we were strolling between the bedsheets of the shady sellers and the tables of the legit market vendors, the dodgy mcdodgersons started packing up like a thunderstorm was about to ruin their picnic. 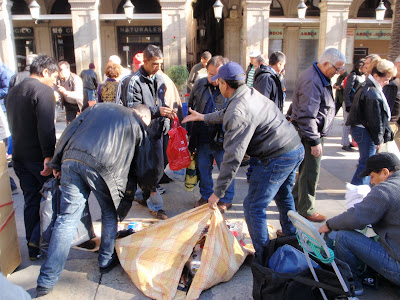 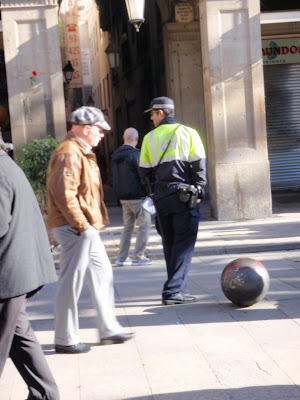 Barcelona's finest showed up on the scene. It was kind of funny to watch the whole thing unfold.
Anyway, here are a few things we learned and saw on the tour: 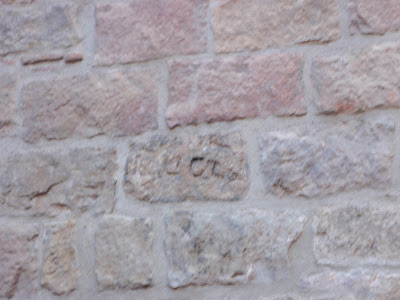 See the Hebrew writing on the stone in the middle of the frame? This is a stone in the back wall of the Vice Roy's palace, built in the 1500s. In the late 1400s/ early 1500s, after the Spanish Inquisition had gotten rid of all the Muslims and Jews in the city, the royalty needed some stones for their palace. The Jewish cemetery on Montjuic wasn't getting much use, so it became the city's newest rock quarry! 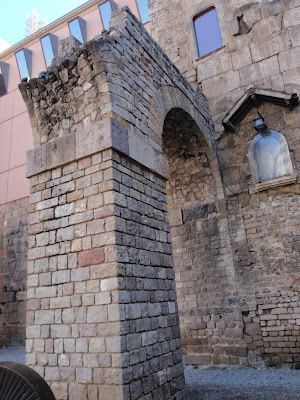 The ruins of the Roman aqueduct that led into the ancient city of Barcino. 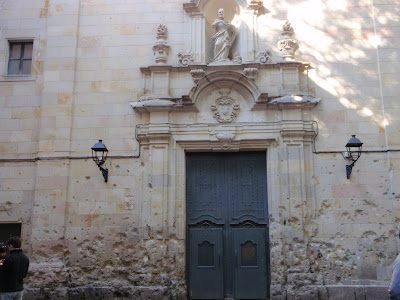 The church of Saint Filipe Neferi. This is the church where Gaudi prayed every day. It's riddled with machine gun bullet holes because anarchists trashed the church during the Civil War. 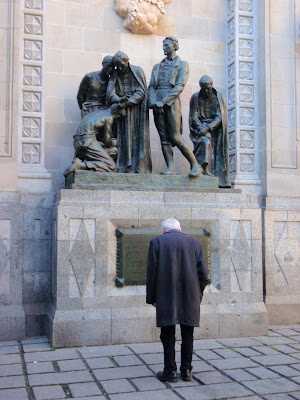 Cute stooped little old men were all over the place in this city! 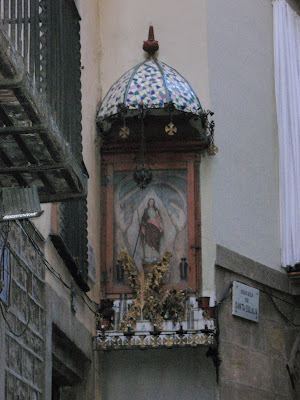 This is Saint Eulalia (said kind of like "Aurelia"). She is the patron saint of Barcelona. She's got an alter on this little side street because this is the street where she was tortured (and eventually martyred) in the early 300s under the reign of Diocletian. 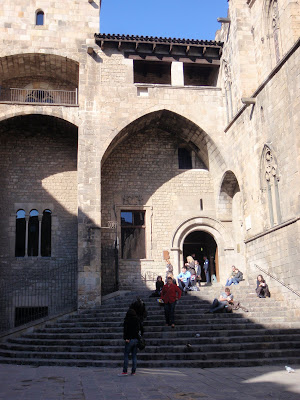 These are the steps on which Ferdinand and Isabella welcomed a guy named Christopher Columbus whom they had sponsored on some trip to some place far away from Spain. No big deal.
Vicariously yours, 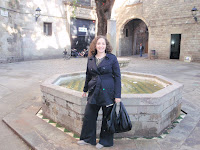 Email ThisBlogThis!Share to TwitterShare to FacebookShare to Pinterest
Labels: Barcelona, lots of photos, Our Awesome Vacations, posts by Amber