How the Twins Were Born pt 3: The recovery

Y'all, I cannot tell you how incredibly grateful Tyler and I are to our doula, Yolandi. We have both leaned on her so much from the second she and Tyler were ushered into the recovery room after the surgery, and I found out that she had helped advocate for delayed bathing of the babies after they were taken to the nursery. One teeny little victory for my discarded birth plan.

The anesthesia was making me feel freezing cold as it was wearing off, so Tyler and Yolandi found me shivering and chattering, which I know freaked Tyler out. Yolandi was a calming presence, helping to reassure him and me that this was normal, and helping Tyler ask the nurses for reassurance of her reassurances. There was a lot of reassuring going on.

From this point on, I can assure all of you that I was probably the worst patient this hospital had ever dealt with!

They didn't know what they were getting themselves into when they agreed with the midwife and forced me into surgery. I was asking to hold or at least see my babies from the second they were born, and I didn't stop asking even as I lay chattering under layers of blankets in the recovery room.

I was told no, maybe I could see them after recovery.

I asked to see my babies as they wheeled me out of recovery and into the maternity ward.

I was told no, I needed to rest.

I asked that they be brought in so that at least their father could see them.

I was told maybe after the doctor did her rounds.

At some point I was told that the babies could be brought to me at 6am. Seemed like an arbitrary time, but maybe that was when shift change happened and I could become someone else's problem.

At 6:30, I asked for my babies again. I had had an 8 pound weight put on my incision and was told that I would have to lay flat on my back like that for 8 hours. I couldn't hold the babies like that, so why bring them in?

I want to breastfeed them, I said.

Oh, no! I still had medicine in my veins, I couldn't breastfeed them.

Their father can hold them, I answered.

I could see the nurse's brain try to think of another excuse.

"You will have to take care of them," she said to Tyler.

"Well...yes, they're the parents," Yolandi said with a gesture toward Tyler and me.

"You will have to change her pads," the nurse added, as if that was going to be a deal breaker for him.

Tyler nodded for a beat, shrugged his shoulder in defiance, and then I saw him realize he didn't actually know what that meant. My sweet husband said, "Ok....you'll have to tell me what that entails, but I can do that."

Yolandi kind of leaned in and said, "I can help with that."

With all their excuses exhausted, the nurses had no choice but to bring me my own children.

I was still so exhausted and medicated from the surgery and the painkillers they had me on, I don't actually remember which baby they gave me first. I just know I popped them on and started breastfeeding as soon as I could, which actually wasn't easy without being able to sit up at all, but I was determined to take control over some part of this experience!

It didn't take long for a nurse to come in and check on me, and she was horrified to see that I was feeding my child. "Oh! Mommy, no!" she said, searching for the words to tell me why I should stop. My doctor appeared very soon after and essentially ordered me to stop breastfeeding. I asked when I could start feeding them again, and she tried to say I wouldn't be allowed to until after the painkillers were stopped in three days.

She kind of chuckled. No, I don't want to do that, she said. The IV was giving me the pain medicine.

"If the medicine is the reason why I can't breastfeed, take it out. Breastfeeding my babies is more important to me than my pain management," I said.

She gave a little nod and said she would let me breastfeed in 24 hours.

Before I get a barrage of judgement, I do realize that I likely did pass along painkillers to the babies through my breastmilk. I had already researched that possibility when I was pregnant with Sadie and again when a c-section looked likely during this pregnancy. Current research shows that the dose of fentanyl that would be passed to the babies could possibly be even smaller than what neonates receive in hospital, and the beneficial properties of breastmilk in the first hours and days of life outweigh the possible effects of the medication. Plus, these kids had already gotten a huge dose of drugs from the c-section I had just been forced into, so if anyone was to blame for the babies having drugs in their system, it was the doctors.

(And to be fair to my doctors, when I finally did come off the fentanyl, what little bit that was being automatically pumped into my body every few hours, HOLY COW WAS THERE A LOT OF PAIN! But I sure as hell wasn't going to admit that to the doctors!)

Anyway, those of you who know me know that I didn't wait 24 hours. I snuck the babies on to the breast as much as I could. They still received a solid amount of formula in their first three days, but I was staging my own little protest behind my hospital curtain, and I have no regrets.

The three days that I was in the hospital felt like they were filled with me challenging as many of the hospital policies as I could. I asked to get the IV and the blood transfusion line taken out every chance I got (apparently it is standard procedure in Korea for all mothers-- c-section or natural birth-- get a line put in before delivery on the off chance that a blood transfusion is needed. It was soo painful and annoying!). I refused further pain medication. I refused the oxytocin they were giving me to make my uterus contract ('cause you know what causes my uterus to contract naturally? BREASTFEEDING!). I would not let them take the babies to the nursery, so the pediatricians required that the babies go to the nursery for their check ups. I asked for the babies to be returned as soon as possible.

Through the whole thing, Yolandi was providing us invaluable support, emotionally and logistically. Unlike in America, hospitals do very little in the way of conveniences or comforts postpartum. There are no adult diapers provided, no diapers given for the babies. My meals were brought to the general area of my bed, but they weren't put within my reach and I was responsible for clearing the tray. Had Yolandi not been there when my catheter was taken out 12 hours after the surgery, I would have been responsible for cleaning up myself and the mess.

This was not because I was a difficult patient, this is just what it's like to give birth in a public hospital in a foreign country. Yolandi gave Tyler a break from the cot on the floor where he was sleeping and allowed him to go home and take care of Sadie for a few hours each day. She provided lactation teas and amazing nourishing snacks. Yolandi was a godsend and I cannot recommend enough to every pregnant woman out there to hire a doula for your birth and postpartum support. We couldn't have made it without Yolandi.

That said, most moms in Korea stay in the hospital for five days after giving birth. I'm pretty sure this hospital was very glad to discharge me after three. And the feeling was mutual.

I know I am being dramatic in all of this. Literally hundreds of thousands of women have c-sections every year, and many of them are very happy with the quick recovery. I know that in 20 years when the babies are in college or doing whatever they choose to do after high school I'm not going to be stewing in anger over their birth. I'll get there eventually, and if I'm honest, every time I look down at one of their precious faces as I'm feeding them, a little bit of the anger is chipped away and replaced by gratitude that their birth story ended with my going home with two healthy babies. 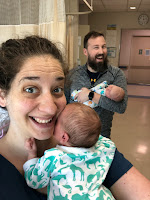