The Struggle to Drive Legally in Kuwait (the long story)

For the two years we were in Saudi Arabia, it was illegal for me to drive. This was a fact I was well aware of before we moved and it turned out to be only a minor inconvenience. My Arabic got better (from non-existent to slightly-less-than-non-existent) because I had so much practice with taxi drivers. But moving to Kuwait definitely had one nice selling point: I could finally drive myself to the grocery store! 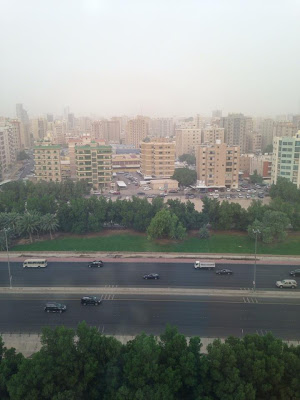 We bought a car in Kuwait from exiting teachers before we even left Saudi Arabia. When we moved to Kuwait permanently, we just had to wait for our residence visas to come through and we could get our drivers licenses. Well...through a series of events that I won't bore you with now, it took an extraordinarily long time for my civil ID to come through and the hubs didn't get his until MARCH of this year! In the meantime we just tempted the fates and drove during non-peak hours without a license. Life got busy and by the time we were both fully legal residents in the country, we were stressed out with school and all the new curriculum we were learning and getting a license became the last item on our to-do list.

"But Amber, what if you got pulled over?!"

The police don't really pull people over in the Middle East, it seems. They are usually driving around with their lights flashing, but it appears they only do that so you know they're there...maybe? There seems to be no real regulation of the speed limits as I have witnessed shabab (young men) blaze past police cars on patrol and parked on the side of the road and the cops haven't blinked an eye. Police don't enforce seat belt or texting-while-driving laws (if there are such laws on the books), so it seems the only reason a police officer would have reason to speak to me is if I were involved in an accident (which is why we drove during non-peak hours) or at a check point.

Flash forward to May 2013. Rumors of a ramped-up effort to nationalize Kuwait and discourage expats from remaining in the country start to circulate. The number of road checkpoints are greatly increased, and a new law for drivers licenses is announced. It appears that the law is mainly aimed at ridding the country of Subcontinental expats (Indian, Bangladeshi, Sri Lankan, etc) who were driving with a forged license or with no license at all. The previous law for drivers had required the applicant earn at least 400KD (~$1400) a month, and that is a small fortune to many of the cleaning ladies, street cleaners, and delivery men that needed a license to get to work. Everything the Western expats were finding indicated that as long as you looked American/Canadian/European, you were waved through the checkpoints without being bothered.

But just to be safe, the Mister and I decided to start the process of getting our license this summer while we were home. The new laws are ever changing and completely illogical to a driver like me who has a relatively clean record in her home country and has held a valid license in the States with no suspensions or issue for more than 14 years. But we are guests in this country, so we had no issue following the local laws, if we could decipher what exactly it was the Kuwait government wanted from us.

When we left in June, the laws--as far as we were told-- stated that drivers license applicants had to meet all the previous requirements (valid visa, salary minimum, etc) as well as the following:


So we spend way too much time this summer stressing about getting our documents authenticated properly. First of all, you can't notarize a diploma unless you witnessed the diploma get conferred, so we got a photocopy of the diploma notarized as a true copy of a real piece of paper that says we graduated from college and hoped the Kuwait embassy accept it.

Then we had to notarize that the notary's signature as in fact a true signature of a real notary.

After getting all of that authenticated by the State Department in Tennessee, we sent everything off to a courier in DC and our headaches increased a million fold.

First of all, the courier we hired in DC made it seem like we would pay about $200 for their services, which is what we had budgeted. Then I get the estimate of their cost and find out that it would be about $200 for the authentications...AND AN ADDITIONAL $300 FOR THE CONVENIENCE OF SOME SCHMOE WALKING OUR DOCUMENTS INTO A COUPLE GOVERNMENT BUILDINGS! That's almost five hundred dollars for something I could have done myself for less than $300, INCLUDING AIRFARE!

The anxiety was compounded by the fact that we waited too long and sent our documents during Ramadan, which meant the courier had a smaller window of opportunity to visit the Kuwait Embassy.

In the middle of visiting family (including my last visit with my aunt Jackie), I get an email from the courier stating that the Embassy of Kuwait wanted paper--not electronic-- copies of our university transcripts and a degree verification from the Student Clearinghouse. Both of these items were easily retrieved though online requests, but I had no internet at my grandparents' house. I found out from colleagues that their couriers in DC simply made these requests on their behalves and added the fees to the final total owed the company. That would have been perfect! But that was not part of the $300 service I was getting from my courier.

So it took forever to get all that stuff delivered to DC and then our courier didn't get to the Kuwait Embassy before it closed for Eid. It took them more than a month to get our documents authenticated and we had to get them shipped to a colleague who was returning to Kuwait after us so she could hand deliver everything to us.

AND THEN THE COURIER DIDN'T SEND OUR ORIGINAL DIPLOMAS BACK WITH ALL THE AUTHENTICATIONS! I called them from Kuwait and the assistant manager literally said, "Oops! I just found them at the bottom of my desk drawer!"

Anyway. I now have all the documents they asked for so I take my stuff to our mandoub (the Guy who helps with all things documentation for our school) and he says I need to get an appointment at the US embassy to have my Tennessee drivers license authenticated--dangit. I forgot that step.

...THREE weeks later, I go for my appointment only to find out that the US Embassy in Kuwait doesn't have the capability to authenticate documents issued in the States, and never has. They tell me they could notarize my license, but everyone who has done that in the past 3 weeks has been refused by the Kuwait government. I should try again next month after they have hopefully negotiated an agreement with the Kuwait government to accept the notarizations or change their expectations.

ALL of that for a stinking drivers license?! I don't have to take a driving test to prove that I can actually DRIVE?! What does my college diploma have to do with any of this!? Why can't the Kuwait government reciprocate? Or allow us to drive on an International Drivers License?! Why all the bureaucracy for something that Kuwait citizens can get with no trouble at all?! And why aren't the unsafe shabab drivers being cracked down on just as strictly as the expats?!

These are the types of questions expats can't dwell on here, or else we will go crazy. Meanwhile, the police are actually stopping Americans now and threatening them with prison time, so we've stopped driving all together.

Hopefully we'll be legal before Christmas! It's all just a part of the adventure.