The Mister and I have survived the first week of school and h'oh boy was it a long one. It started humorously enough and, considering how everything went, it ended well enough. Let's begin with the comical wild goose chase my husband and two friends took through Kuwait City.

It was the last day of pre-first-day meetings and room prep. I was running late that morning and was juggling lots of bags of school supplies, our lunches, and my usual messenger bag. I walked out and pressed the elevator button only to remember that I'd left my iPhone 5 in the apartment. I dashed in quickly, did a cursory scan of the usual three places, didn't see it, so I said "screw it" and locked the door.

Fast forward to the end of the day. I come home at 5:30 and immediately begin the search for my forgotten phone. My aunt Jackie had been sick, so I wanted to see if I'd missed any updates while I was at work. I looked under couches, shook bed sheets, opened drawers, and found nothing. So I hopped on my iPad and activated the Find My iPhone app. It uses the GPS signal my phone puts out to show me where on Earth my phone is.

According to the app, my phone was in my apartment. So I continued the search until the Mister came home and he joined in. He started calling the phone and we listened for the buzz (I'd left my phone on silent). Nothing. So I started recounting all the steps of my search. I pulled out my iPad to show the hubs the map and as I was saying, "...and look, the phone is in the apartment" I cried out "---HOLY CRAP THE PHONE IS WALKING DOWN THE STREET!!" instead.

The little green dot that had been hovering over my building's location was now high-tailing it down a side street and getting on a major highway that runs across town. HOW IS THAT POSSIBLE?!

I was dumbfounded. What do I do in a situation like this!? Call the police? They're seriously not going to care about some expat's stolen iPhone. Go running after it? What am I going to do if I find the guy who took it?

While I was on the phone with my principal to see if he had any ideas I didn't think of, the hubbins grabbed the car keys, called our two close friends Matt and Austin and started burning rubber in the direction of my phone.

It was a really exciting evening, now that I have had time to step back and think about it. My friend Stacey came over and we had a command post set up in my living room. We were tracking the Mister's iPhone on his iPad, and continued to track my phone on my iPad. We were using Stacey's phone to communicate with my principal (who was really excited by the crime-fighting action of it all), Austin, Matt, and the Mister. I also bounced across the hall from time to time to give updates to the PE department who were having a cookout at my neighbor's house. 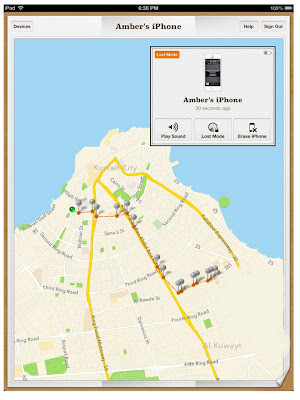 The boys followed my phone through eletronics souqs (imagine a street with nothing but phone shops from end to end), getting out of the car and pursuing on foot at one point. For a little while we thought the perp might have been on a bus because the boys were directly behind the green dot of my phone as they were simultaneously directly behind a city bus.

"What are you going to do!? Drop a trail of our friends off at each bus stop when someone gets of and have them lurk in the shadows as the thief walks home?!"

Eventually we figured out the phone wasn't on a bus. It was heading back home! At least that's what I hoped. I watched in confused amazement as the green dot made a loop and started back in the direction of my apartment building! I was hopeful that the thief had accidentally...uh...broken into my locked apartment and taken my phone--ok, I said it was hopeful, I didn't say it was logical.

Anyway, the green dot stopped at an apartment building about 4 blocks away from my house. Our school is in the same neighborhood so the boys went to the school and found our Guy (you know, the Guy who can help with everything. He is sort of the head of maintenance at the school). He took one look at the map and said, "I know exactly who lives there."

Turns out the apartment building where my phone was located was also a place where lots of the cleaning ladies and maintenance men who work for the school live. One of the people who live in the building is a woman who looked after our cats for a couple weeks this summer. When the boys and our Guy (who is her boss) questioned her about the theft she vehemently swore that she had given back our keys and hadn't been in our apartment!

The Mister tried to call my phone in hopes of hearing the buzz and calling it a night, but the thief had now found someone who knew how to turn an iPhone off, so there was no buzz to be heard.

The search was over.

My phone is gone forever.

I was hoping this story would have a happier ending, but no such luck. I'm going to need to save up almost $850 to buy another iPhone 5. We've asked the school to change our locks. I am now using my iPad to keep in touch with my family. And now you've got a story to tell about someone who actually used the location services feature to watch her iPhone disappear onto the Kuwaiti black market.

Unfortunately, my first week of school only got more dramatic from there.