Caen: Bombed to hell and back

During World War II, 80% of the Norman city of Caen was bombed to oblivion. The city likes to be known as the home of William the Conqueror, and its most historical buildings date back to the Middle Ages. After the British and Canadian battalions that were supposed to liberate the city after D-Day were held up by the Germans, the city suffered incredible damage. It took almost 15 years to rebuild the city, and as a result a lot of the beautiful old architecture was replaced with a 1950s and 60s aesthetic.

There were still some amazing things to see in this city, though. We came upon a church in the center of the city that stopped us in our tracks. 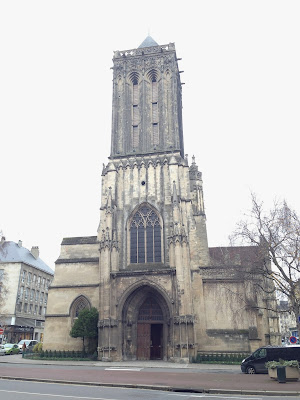 It is called the Church of Saint Jean and no, the photo is not crooked. The church is! If you do a google search on churches in Caen (this city was once called the City of A Hundred Churches, according to our Airbnb hostess), you won't find this church as one of the top results. But I'm glad we stopped in. 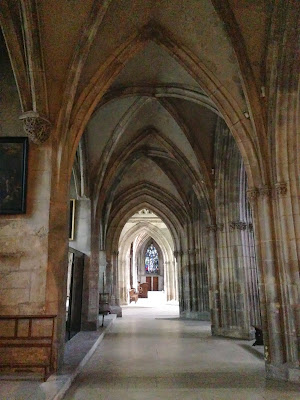 The inside of the church feels like something out of Alice in Wonderland. These photos don't do the twist of the nave justice. The entire building is leaning, so much so that they have had to build a huge support structure in the entrance. 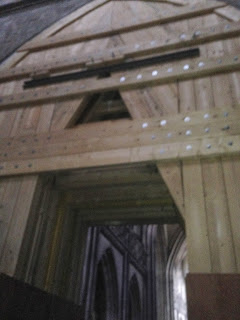 This is what the church looked like after the dust settled in 1944. 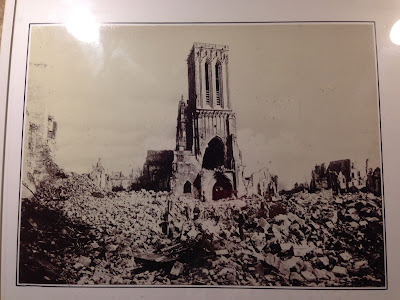 There was barely anything around it! Understandably, the foundations of the church were rocked by the bombing of the Battle for Caen (not the be confused by the Battle OF Caen, which happened in the 1300s), and the tower still stands at a severe lean.

They are still working to restore the church, and based on the number of other, more historically significant, churches in the city still needing restoration, I'm sure the parish has a long way to go before the project is fully completed. In the meantime, they depend on the donations of passer-by tourists like the Mister and me.

Email ThisBlogThis!Share to TwitterShare to FacebookShare to Pinterest
Labels: Church of St. Jean in Caen, churches damaged in WWII, posts by Amber