Being that we are both teachers, the Mister and I planned our wedding in July: right in the middle of our annual vacation.

This year marked 4 years of marriage, and back in February, I had a fantastic idea for this year's celebration: 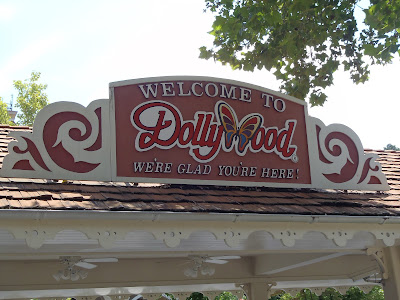 I love Dolly Parton. And I could not think of a better way to spend my anniversary than with the man I love, and Dolly cheesiness!

We rented a cabin through Dollywood Vacations, and that was by far the best idea we've had in a while. The cabin was the perfect size for the two of us, had a great view, and we could hear the Dollywood train whistle every day! I loved it!

Of course, there was NO way we were going to be staying that close to Dollywood and not go to the park! We spent 2 days in a Dolly wonderland! I loved it! The sound of Dolly's songs were in the air, screams of park goers drew us to the roller coasters (a new addition since the last time I'd been to the park--TWENTY years ago!), and the smells of greasy theme park food met us at the front gates. HEAVEN!


To break up the excitement of all that Dolly, in the middle of our trip we went to the aquarium in Gatlinburg. Friends and family know how much the Mister and I love a good aquarium. This one was crawling (literally, at times) with kids and their families, but we still enjoyed watching the fishies. The best part had to be the penguins.


On our anniversary night, we went out for a big, fancy, expensive dinner: The Dixie Stampede! Cause nothing says romance quite like dinner theater!!

For those who have never had the pleasure, the Dixie Stampede is Dolly Parton's "dinner attraction." You get a big, hands-on meal while watching a horse show musical-slash-competition. It's all finished off by a logger race at the end. It was redneck, mildly racially insensitive, and hilariously tacky. I loved it.

Even though he had his doubts at the beginning, the Mister declared that this was one of my better ideas for an anniversary vacation. He should have known to never doubt the Dolly. That girl knows how to have a good time!! 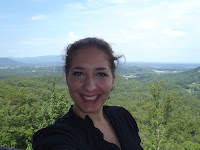