This is Sri Lanka: A list of things that can be seen all over the place in the land of paradise

This is a stray dog.
The number one most common thing we saw on our trip to Sri Lanka were pitiful stray dogs. Some of them were cute, scrappy, spunky looking little mixes that trotted their way through the little village streets. So many of them, however, were mange-riddled skin-and-bones that looked like they were scared to be out in daylight.

I asked our tour guide what the deal was and he said that most Sri Lankan families will keep a dog while it's a puppy and cute, but once it starts to get big (and I suspect gets to reproductive rowdiness), they kick them out and make them live on the streets. They don't put stray dogs down because it condradicts Buddhism.

This is a typical Sri Lankan street. 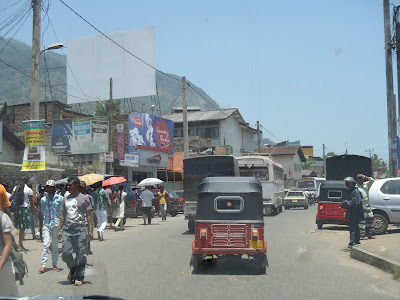 Umbrellas and tuk tuks. As you can see, it wasn't rainy season yet. I think using the umbrella as sunblock is an Asian thing, and I mean that in the most un-racist way possible. I've noticed that in our travels, it's always the Japanese, Chinese, and Indian tourists that use umbrellas as opposed to caps or sunglasses to keep the sun out of their eyes. I know the umbrella also serves as a method of keeping your skin fair, not just to keep the sun out of your eyes. I just think it's interesting that it is so popular with this particular culture.

For those who have never seen one, the red, Big-Wheels looking thing in the middle of the photo is a tuk tuk. The tuk tuk is the taxi cab of choice in Sri Lanka. It's basically a three-wheeled moped that has a cab built onto it. The tuk tuks are endlessly customizable and they cracked me up! They would dart in and out of traffic, riding on the shoulders, ceaselessly tooting their little horns. 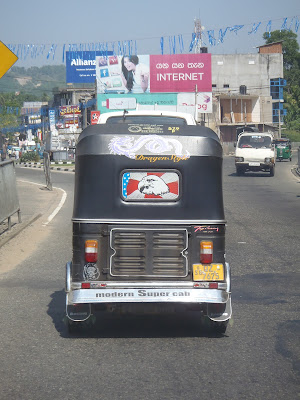 I have no idea why, but we saw the stars and stripes all over Sri Lanka! On buses, on tuk tuks, business logos, taxi cabs. I wondered if it was because these businesses were trying to attract the American tourists and their money?


This is an advertisement

Thankfully, the energy-sapping LED billboards have not made their way to Sri Lanka. The roads are covered in the traditional kind of billboards, and their advertising methods crack me up! The ad above was all. over. the country! This lady and her photoshoppers had a very busy day! In some ads she was dangling extremely spicy noodles into her mouth. Others featured her cutting to the chase and just eating a straight-up chili pepper. Other photos had her seductively sucking on a ramen noodle dangled from her well manicured fingers.

I'm pretty sure all three variations were selling the same product, and I certainly hope this ad campaign has made this lady a very wealthy woman!

I was told before leaving for our trip that something like 98% of the citizens of Sri Lanka are literate. I found this information to be astounding and slightly unbelievable, but our tour guide confirmed the fact. After seeing how much text is all over the place, I have no doubt.

This is a Sri Lankan wedding party 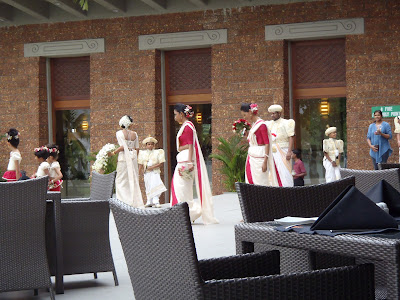 I apologize for the clandestine nature of the photograph. I didn't want to be THAT person taking photos of a strange couple and their bridal party. However I had to snap evidence of at least one wedding because we probably saw 20 over the course of our trip. At first it was exciting ("Oh look!! A wedding!") and then it became a part of the background. (Oh look. Another wedding.)

It didn't matter what day of the week it was, there was a wedding going on. I asked our tour guide what the deal was with that and he explained that Buddhist couples (at least the ones in Sri Lanka) decide their wedding day based on their horoscopes. They get engaged and then check their signs and wait until a day that their stars are most compatible to say their vows. So if the stars align on a Thursday, guess what! You're getting married on a Thursday!

This is a Sri Lankan roadside market. 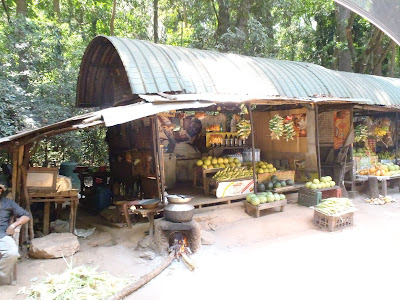 These things were all over the sides of the road, even in the middle of the remote jungle highways! What I found to be most interesting was the fact that when you came upon these little stands, they were usually clustered in groups of 5-10 and they were ALL selling exactly the same thing! It was almost like each town had a theme. One town sold cashews, another sold handicrafts, another sold creepy inflatable animals and baby pools. Some even just sold crappy plasticware: laundry baskets, brooms, baby washtubs. The most common stand, however, was the old fall-back: fruit. 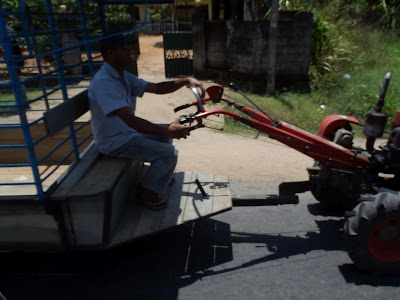 Because our camera is on its last leg, I was never able to capture a proper photos of these things. But this one helps you to get the idea. We saw these tractor-meets-a-cart things all over the country!! As you can see, it's a cart hooked up to the motor end of a tractor. I kind of looked like one of the soil tillers my dad used in the garden when we were kids, but without the tilling blades.

They went extremely slow, and were very loud. But I guess they were cheaper than having to pay for a horse? I dunno.

This is a Sri Lankan bus. 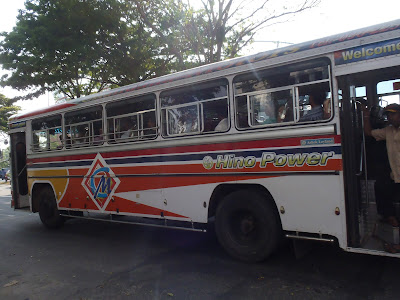 Correction: this is a privately owned Sri Lankan bus. Again, because our camera is about to crap out on us, I struggled to get a good photo of the buses in Sri Lanka. Add to that the fact that these things were rarely standing still and were often running people and other vehicles off the road and you'll begin to appreciate the fact that I was able even get THIS shot.

There were two kinds of buses in Sri Lanka: the flamboyantly decorated white ones, and the plain red ones with the insignia of the country on the side. The white ones were privately owned by at least 5 different companies. The red ones were owned by the government. Both buses ran the exact same routes. Usually, unless the white buses were air conditioned, both buses cost exactly the same amount.

One day we were driving behind a red bus, with a white bus behind. The white bus kept trying to pass us, honking its horn and riding our bumper. Traffic was a heavy and the road was really narrow, so when the driver got the smallest chance to pass us, he took it. He passed so closely, one of the passengers had to pull his elbow in from the window in order to avoid hitting our van! I asked our tour guide what his hurry was and he said, "The driver is trying to get to the next town before the red bus because he wants to get the customers!" Sneaky sneaky!

This is a Sri Lankan police officer. 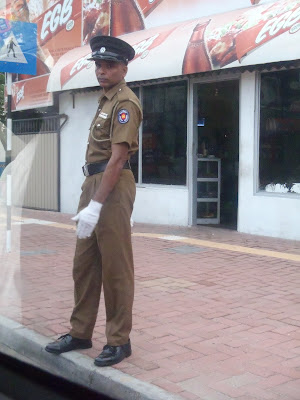 We saw very few stoplights in Sri Lanka. In fact, I didn't see any outside of Colombo. There are big intersections in the countryside, but no lights to direct traffic. It's just every man for himself and wait your turn. And you know what, in the entire week we only saw one car accident and I think it was because of a car malfunction as opposed to driver error.

Anyway, the point of the photo of the cop is to say that as a result of the lack of traffic lights, Sri Lanka puts police officers out on the streets at busy traffic times to make sure everyone is playing nice. That meant we saw a lot of police officers in the morning rush, around 1:30 when school was letting out, and again around 5.

Sometimes they just wore the white gloves to direct traffic, but other times they had on these detachable white sleeves: 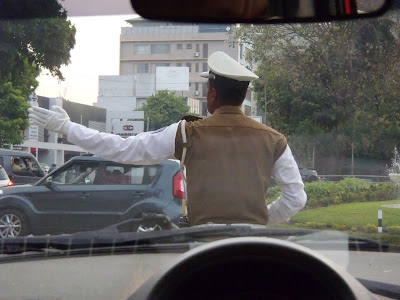 Can you imagine how hot those things were in the summer heat? I asked our tour guide and he said that even in the middle of winter, it doesn't get colder than the high 60s because Sri Lanka is so close to the equator. Woof! That's one job I wouldn't want come July! 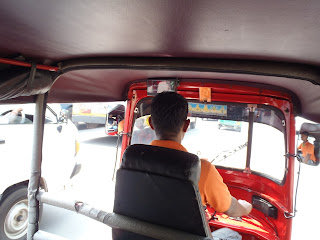 Just because I know you were curious. 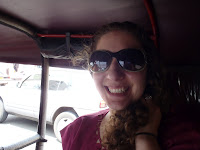