in which arabs never cease to amaze me.

I mean, honestly, you think you know a guy.
Recently, my co-teacher in Geography's father passed away. Unfortunately it was very sudden and he was gone from school for about two weeks. During this time I covered his classes in addition to my own. Needless to say it was pretty intense. I had probably one or two planning periods out of nine and any teacher knows that is not easy. Add to this that the kids were in substitute mode.
SIDENOTE: In light of Amber's last post, I should probably apologize to every substitute teacher I ever had right now. To quote former President Clinton, "I feel your pain..." (the hand gesture is implied, of course) 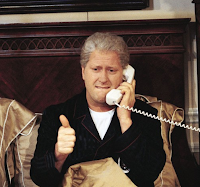 Wow, it is really not hard to find sketchy pictures of SNL Clinton on the internet...
Substitute mode is pretty horrible. The kids never stop talking, usually do exactly the opposite of what you request, and any attempt to advance the curriculum is met with a defense that would make the Russians jealous. So I was understandably nervous of how they would act for my colleague when he returned. The poor man had lost his father and then he was going to have to deal with some horrible punk kids when he got back...
...but then he got back. And they were everything you could have asked for. Every kid came in and immediately offered their condolences and, as is their custom, kissed him on the top of the head. During class? Not a peep. They all took notes and followed along with the lesson. Not a few of the students, but Every. Single. One. I tried to not let my mouth hang open as I watched this serenity of the classroom, but I was in awe.
Now, if the point of coming to this country was to understand these people better, then yeah I think I'm doing that. But I realize it's coming slowly. Last night we met a guy who'd lived in KSA for 30 years! I asked how he had done it, and he simply said, "It grows on ya..." I think I can see why. I'm constantly impressed with the level of respect that the students have for customs despite their blatant disregard for school rules and procedures. The disconnect between these dual personalities of my students is something I'm constantly confused by. Then again, little things like watching the students being very sympathetic to a hurting teacher...maybe Saudi is growing on me too...today, anyway.
Vicariously yours, 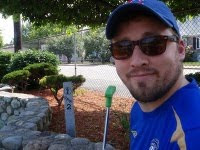